Q: Can we set or confirm the Biblical Calendar according to the agricultural activities surrounding Sukkot (Booths) which the Bible also calls the "Feast of Ingathering" (Ex 23,16)?

"Three times in the year you shall observe for me a festival... And on the Feast of Ingathering (Hag Ha'Asif) at the going out of the year, when you have gathered in your work from the field."

The feast of ingathering takes place at the end of the agricultural cycle, just after the last crops have been "gathered in". This "gathering in" does not refer to the actual act of harvest but rather to the actions performed on the crops after harvest, as can be seen from Dt 16,13:

"You shall keep the Feast of Booths (Hag HaSukkot) for seven days, when you have gathered in from your threshing floors (GoReN) and from your wine presses (YeKeV)."

We see from this passage that by the time of Sukkot/ Ingathering the farmers in ancient Israel had gathered into the storehouses the last of the remaining grapes and grains from the outdoor winepresses and threshing floors. Although the actual grape and grain harvest was completed some time before Sukkot, much work had to go into the harvested produce before it could be eaten. In ancient times the grapes were processed into wine and raisins in a winepress (YeKeV) which consisted of a floor for treading the grapes and vats to collect the juice. Grains were processed into kernels and straw on a threshing floor (GoReN) where the stalks were threshed and the kernels were winnowed. 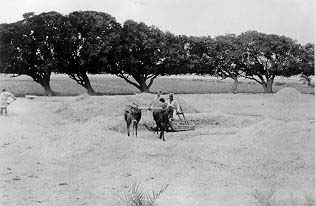 In ancient times the threshing floors and winepresses were located outdoors. As a result, towards the end of the long process of preparing the harvested grapes and grain the crops would be in peril of being destroyed or damaged by rain (note that there is almost no rain in the summer and early autumn in the Land of Israel). We read in the Torah of YHWH's promise to the People of Israel that if they keep His Torah they will have time to gather in their produce from the threshing floors and winepresses before the coming of the winter rains:

"And it will be if you obey my commandments... And I will give you rain in its proper time, the early rains and the latter rains, and you shall gather in your grain and your wine and your oil" (Dt 11, 13-14)

In anticipation of the coming rains the Israelite farmers would work furiously to gather in their crops from the outdoor threshing floors and winepresses. If they were blessed then the huge undertaking of gathering the drying grapes and winnowed grain into storehouses would be completed before the first rains and by Hag HaSukkot they could rest easy with their crops securely removed from danger.

Today grain is winnowed and threshed during the harvest itself using a combine and grapes are no longer treaded in outdoor winepresses. As a result, there is no longer an "ingathering" in the ancient sense. Certainly today when combines have made the "ingathering" part of the grain harvesting process and indoor winepresses have removed the danger of the wine being spoiled by rain, the "ingathering" can not serve as an indicator to confirm the correctness of the Abib-based Biblical calendar. To be sure, even in Biblical times the "ingathering" did not serve as an indicator to verify the beginning of the year, since this was determined 6 months earlier solely based on the Abib. Instead, the timing of the winter rains relative to the "ingathering" served as an indicator of Israel's faithfulness to the Torah. Even today, the promise of rains in their proper time is no less important then it was in ancient times. With the Kinneret reaching an all time low in recorded history we are reminded that even in a non-agrarian society the Land of Israel depends for its very life on YHWH's blessing.

Back to Abib FAQ